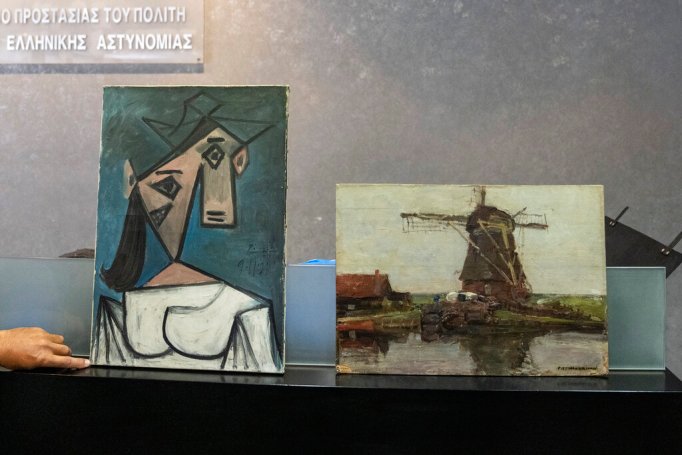 Stolen works by Picasso and Mondrian were recovered by Greek police this week.PHOTO PETROS GIANNAKOURIS/AP

To receive Morning Links in your inbox every weekday, sign up for our Breakfast with ARTnews newsletter.

SOME STORIES JUST KEEP ON GIVING. Earlier this week, Greek police recovered paintings by Picasso and Mondrian that were stolen in 2012 from the National Gallery in Athens. Now details are emerging about the saga, behind the scenes. The main takeaways, as compiled by Smithsonian Magazine: The man arrested for the heist is a construction worker, George Sarmantzopoulos , 49, who has also been identified as a painter. He confessed, and led officials to the works. His lawyer said that Sarmantzopoulos had not intended to sell them, and that he was just an “art lover” who became obsessed with the pieces, according to the Art Newspaper, citing Greek press. (The thief’s Twitter name was “ArtFreak” at one point.) He apparently spent more than six months planning the job, and told police, “I confessed to a girl I had a relationship with in England that I had the paintings, but she didn’t believe what I said.” (Rough!) Also, the Picasso—which the artist donated to the country to honor its resistance to the Nazis—fell to the ground while being shown by the police. Reuters has video.