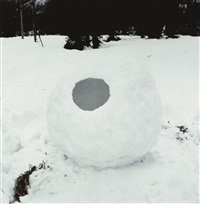 Andy Goldsworthy is a British artist known for his site-specific installations involving natural materials and the passage of time. Working as both sculptor and photographer, Goldsworthy crafts his installations out of rocks, ice, leaves, or branches, cognizant that the landscape will change, then carefully documents the ephemeral collaborations with nature through photography. “It's not about art,” he has explained. “It's just about life and the need to understand that a lot of things in life do not last.” Born on July 29, 1956 in Cheshire, United Kingdom, the artist spent his teenage years working as a farm laborer in rural England before going on to study art at Bradford College of Art and later Preston Polytechnic. In 1985, the artist moved to Scotland where he began producing work inspired by Robert Smithson and other Land Art practitioners from the 1960s and 1970s. Over the following decades, he became associated with the Environmental Art movement alongside Richard Long and Chris Drury. In 2001, Thomas Riedelsheimer’s documentary film Rivers and Tides: Andy Goldsworthy Working with Time was released, showing the artist at work in nature and his process beforehand. A follow-up documentary, Leaning Into the Wind, was released in 2018. Goldworthy’s works are held in the collections of the Courtauld Institute of Art in London, the Storm King Art Center in Mountainville, NY, and the National Gallery of Art in Washington, D.C., among others.   The artist currently lives and works in Dumfriesshire, United Kingdom.