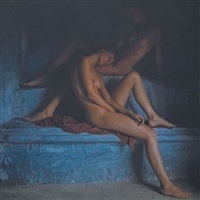 David Hamilton was a British photographer and film directorknown for his nude photographs of adolescent girls. Often controversial, theimages evoke an effect of dreaminess through soft focus and varied grain. Usinga photographic technique akin to painting, he has acknowledged the influence of Lucas Cranach on his style. Born on April 15, 1933 inLondon, United Kingdom, the artist initially found work as an art director,then a commercial photographer in the 1950s and 60s in France. In 1979, hisfilm Laura was released in France—the movie blends melodrama withsoft-core pornography, as wells as Hamilton’s hallmark soft focus. He publishednumerous photobooks during his life, The Age of Innocence (1995) being one of his most popular. Similar to thework of Jock Sturges and Sally Mann, Hamilton’s erotic subject matter caused complaints ofindecency over the decades. In 2016, the photographer was accused of rape byfour separate women who had served as former models. In an apparent suicide,the photographer was found dead with a plastic bag over his head on November25, 2016 in Paris, France.