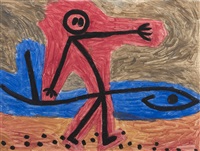 Paul Klee was a Swiss painter and important figure in the development of early 20th-century avant-garde art. Klee’s breadth of subject matter ranged from the child-like portrait Senecio (1922), to the geometric abstraction of Castle and Sun (1928). He often painted architecture as well as the natural world, using his signature expressionist style to represent space. “Spatial art does not begin with a poetic mood or idea,” he mused. “But with construction of one or more figures, with the harmonizing of several colors and tones, or with the devaluation of spatial relationships and so on.” Born on December 18, 1879 in Münchenbuchsee, Switzerland, his imagination as well as an appreciation for art and music was cultivated by his family from a young age. As a young man, Klee studied art in Munich under Heinrich Knirr and the Symbolist painter Franz von Stuck. It was in Munich that he fell into the circles of Wassily Kandinsky and helped form the Der Blaue Reiter group. The group’s tenets included an interest in the expressive potential of color and its relationship to music, spirituality, and folk art. Klee exhibited alongside fellow members of the group August Macke, Franz Marc, and Alexej von Jawlensky throughout the 1910s. During the 1920s, the artist taught at the newly formed Bauhaus school at both the Weimar and Dessau campuses, before being forced by the Nazi regime to leave Germany in 1933. His works were later included in the Nazi’s infamous “Entartete Kunst” (degenerate art) exhibition of 1937. Klee was the subject of major exhibitions in both Bern and Basel before his death on June 29, 1940 in Muralto-Locarno, Switzerland. Today, the artist’s works are held in the collections of the Solomon R. Guggenheim Museum in New York, the National Gallery of Art in Washington, D.C., the Tate Gallery in London, and the Kunstmuseum Basel, among others.