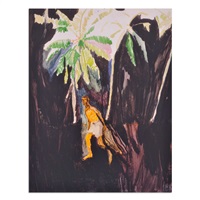 Peter Doig is a contemporary Scottish artist, celebrated as one of the most important representational painters working today. His paintings are characterized by their equal focus on both landscapes and figures, melding art historical and personal references into painterly abstractions with distinctive compositions. By forming powerful and affecting snapshots of contemporary existence—such as a childhood ski trip or an orange canoe—Doig’s works are both diaristic and universally relevant. Fiercely eclectic, his practice shares no central formula, and instead functions as part of a whole that provides insight into his personal history and political ethos. “I'm not trying to make paintings look like photos,” he has said of his process. “I want to make paintings using photos as a reference, the way painters did when photography was first invented.” Born on April 17, 1959 in Edinburgh, United Kingdom, his family relocated to Trinidad in 1962 for his father’s job and later to Canada in 1966. Doig moved to London in 1979 where he studied at the Wimbledon School of Art and later received his MA from the Chelsea College of Art and Design in 1990. In 2000, his friend the painter Chris Ofili invited Doig to an artist residency in Trinidad. He has since held several solo exhibitions including “Peter Doig: No Foreign Lands” which opened in 2013 at the Scottish National Gallery in Edinburgh, this was notably the first show of the artist’s work to be held in the country of his birth. In 2007, his painting White Canoe sold at Sotheby's for $11.3 million, which was at the time an auction record for a living European artist. Doig has lived and worked in Trinidad since 2002. Today, his works are held in the collections of the Art Institute of Chicago, the National Gallery of Art in Washington, D.C., the Tate Gallery in London, and the Goetz Collection in Munich, among others.