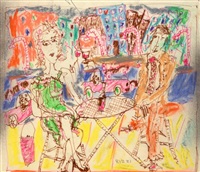 James Rizzi was an American Pop artist best known for his vibrant, youthful graphics and his three-dimensional prints. He was the official artist for the 1996 Olympic Games in Atlanta, adorning the famous logo with his noodle-like drawing style. Born on October 5, 1950 in Brooklyn, NY, the artist drew his inspiration from a diverse range of sources, such as Paul Klee, Keith Haring, Andy Warhol, and Jean Dubuffet. He studied art first at Miami Dade College, then at the University of Florida, where he developed his at method of three-dimensional printmaking by hand-coloring silkscreen prints before affixing cutouts. Moving back to New York in the mid-1970s, the artist began taking on projects that included album covers for the Tom Tom Club, puzzle designs, and toy manufacturing. In 2008, the Rheingold Hall in Mainz, Germany, put on a retrospective of Rizzi’s work that included over 1,000 artworks. The artist died on December 26, 2011 in New York, NY at the age of 61.