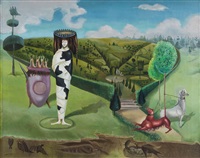 Leonora Carrington was a British-Mexican painter known for her Surrealist works. Full of enigmatic symbolism, Carrington’s Self-Portrait (c. 1937–1938) depicts the artist in a domestic interior, extending an open hand to a female hyena. “You may not believe in magic but something very strange is happening at this very moment,” she once said. “Your head has dissolved into thin air and I can see the rhododendrons through your stomach.” Born on April 6, 1917 in Clayton Green, United Kingdom, she went on to study painting in Florence, and later attended the Chelsea School of Art in London. While back in London, she met a number of the Surrealists visiting England for an exhibition. Quickly drawn into their milieu, she had a short-lived romance with older German painter Max Ernst. Abandoned by Ernst when he fled persecution to the United States, Carrington was hospitalized with a mental breakdown. After recuperating, she emigrated to Mexico, resumed painting, and became a part of the women’s liberation movement. Before her death at the age of 94, the artist had established herself as integral figure in the short-lived Surrealist movement. She died on May 25, 2011 in Mexico City, Mexico. Today, Carrington’s works are included in the collections of The Museum of Modern Art in New York, the Peggy Guggenheim Collection in Venice, and the Tate Gallery in London, among others.